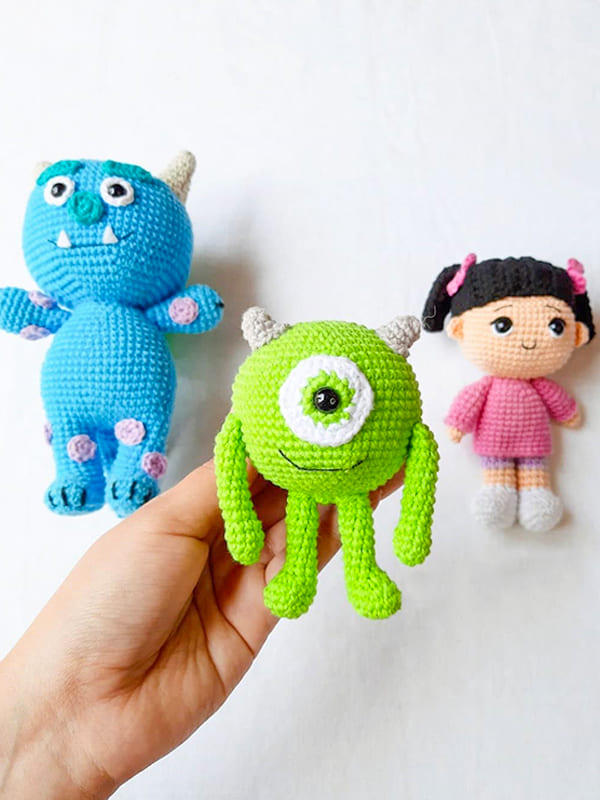 Greetings all friends,
Today, we will make the crocheted amigurumi pattern of the Mike character, who is in the cartoon monsters movie that children love very much. Thanks to its detailed step by step explanation, you will be able to complete this cute green one-eyed monster toy. Would you like to make a crocheted amigurumi toy for your children with your own hands? If your answer is yes, let’s take you to this free crochet amigurumi pattern description.

We start crocheting our one-eyed green monster amigurumi character, first of all, from the legs.

After crocheting the legs of the green overhead monster, let’s move on to the construction of its arms.

We have completed the arms and legs of the cute crochet amigurumi monster very nicely with crochet. Now it’s time to create one eye.

After finishing the cute green monster amigurumi character’s eye with crochet beautifully, we are making his horns. Remember, you will do 2 the same way.

After completing the horns of the cute green one-eyed monster, it remains to make the body, which is the last part, and then the green one-eyed amigurumi monster is completely finished.

Congratulations we have successfully completed the one eye green crochet monster toy. See you in the next free pattern.