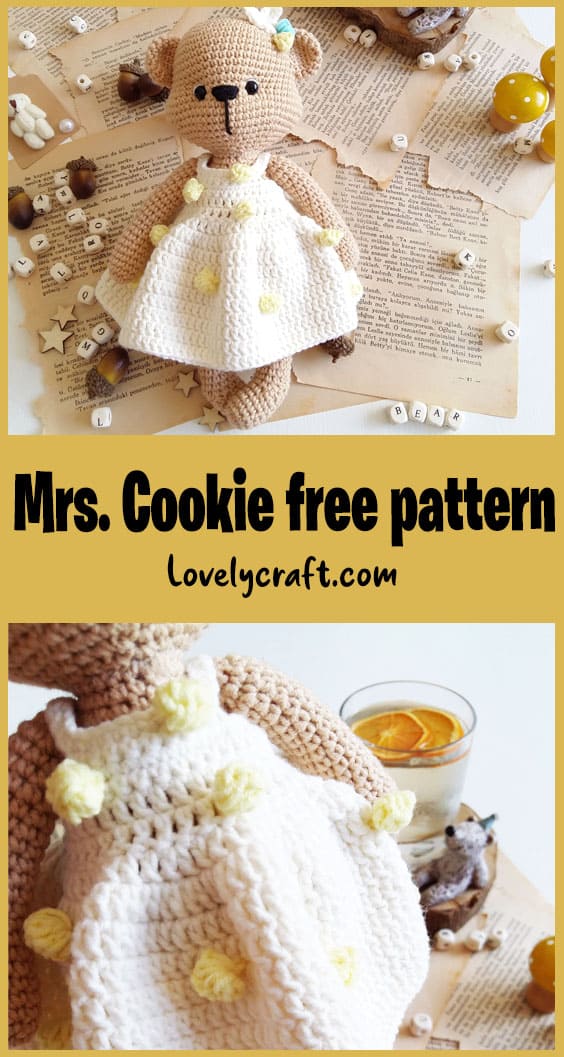 Welcome to my Amigurumi blog! Mrs. I am happy to share the cookie amigurumi pattern with you free of charge. You must continue reading to create this cute pattern. Achievements.

FINISHED TOY IS AROUND 30cm HEIGHT.

Use a different color long yarn piece to mark beginning of round while crocheting legs.
After 11th round foot part will take its shape. Then crochet st at its sideways and front section. After that, legs will be completed by crocheting sc in next 12 st between 12-22 rounds.
When first leg is finished, fasten off and crochet second leg. After second leg finished do not fasten off yarn and join two legs with chain. Then continue crochet the body part.
Start with legs. After crocheting front foot part of leg, at 8th round heel part will be crocheted. Lastly, after 11th round is completed rest of the rounds will be crocheted and legs will be completed.
Don’t forget following instruction images and notes!
Join two legs and crochet the body as a single piece. 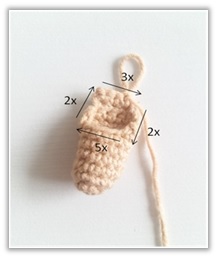 After crochet legs, start crocheting body part. Before joining legs make sure legs look toward inside.
While joining legs with chain, fold leg at the middle. When crochet up to waist part of body start filling polyester fiberfill.
After body is finished fasten off and leave a long tail.
Please follow instruction images! 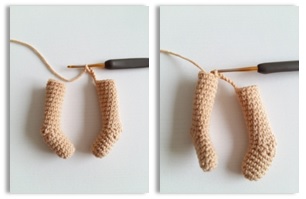 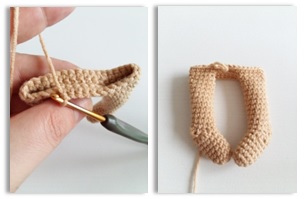 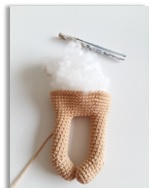 Body is finished. Fasten off and leave a long tail.

At head part, when reached the 17th round, start crocheting cheeks. There will be two protrusion at both side of head. Use a different color long yarn piece to mark beginning of round. Therefore you will increase and decrease stitches at right location.
After 23rd round, insert the safety eyes at this point. To find the center point fold the head at the center from cheek sides so safety eyes can be symmetrically inserted. After finish the head, fill the head with polyester fiberfill and continue with creating head form.
Please follow instructions images and all notes about crochet steps.
Place the safety eyes between 17 and 18 with 10 stitches gap between them.

Fill the head with fiber after eye engagement and closure is complete. Get help from the visuals when filling fiber. Completed to prepare with fiber without degrading the head form.
Then we will shape your face with your milk coffee rope. Knot the end of the rope. Enter the lower part of the head with your needle and exit the lower part of the eye.
Almost through the loop to the other eye to do the same process and close the two eyes to each other to fix the rope. Do a few times while stretching with a rope between the two eyes. This way it will be more robust.
Pay attention to the point you want; It shows the very close range of the eyes. Two fingers between two fingers.
After this process is finished with white rope to the edge of the eyes of the half-circle design and black rope as in the visual nose, mouth, eyebrow process.
After the head is over, we sew two parts with the long rope we leave your body. There will be a gap between body and head while joining. Fill the form with fiber and close it with stitches. 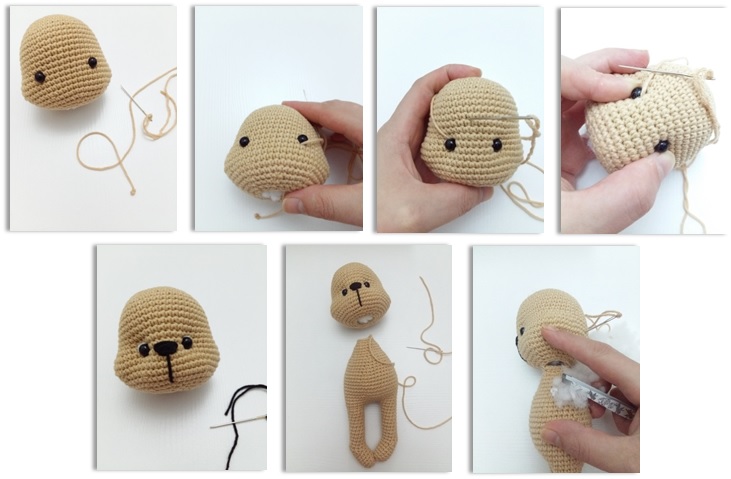 At 21st round start filling arm with polyester fiberfill. Then finish 22nd round and join stitches to close arms. Fasten off and leave a long tail to sew arms to the body.
Place arms at shoulder section of body as narrow section of arms are looking towards the outside (Shoulder section of body is 3 rounds below from head).
Ears; Planting on both sides of the head. They will stop between 8-15 rows. Ears do not fill with fibers.
Please follow up the instruction images. 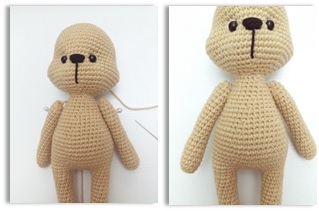 A total of 11 yellow and 1 blue tiny balls will learn.
10 of them; Dress will be randomly tied on. 1 Yellow and 1 Blue; She’s gonna be standing over Mrs.Cookie.
Don’t forget to leave your rope long when starting Bobble Sticth. This will help you to throw the knot.

Ch4( the first chain stitch will be circle,the others will be counted as first dc), 1bobble stitch,slst. If you have questions you can ask me with social media accounts. You can follow me.