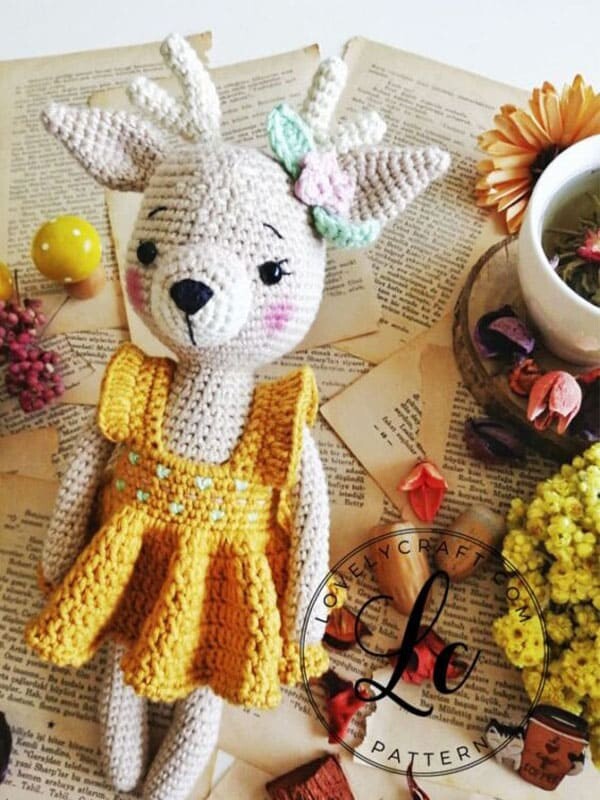 Dear friends. Today I will share with you a very cute and wonderful crocheted deer amigurumi pattern. Especially in winter or when Christmas approaches, amigurumi patterns such as crochet deer become very popular. I am sharing a wonderful deer pattern for you on these beautiful days. Before continuing with the subject, I would like to give you some information about the pattern. This deer pattern was created with 2.5mm crochet hook. You can see all the features of the yarns used in the materials section. I tried to give you enough information about this subject as much as I could to knit the amygdala. I should also say this.

It was a very difficult pattern to prepare. As you can see, even the details on the amigurumi dress are quite high. You can see tiny heart details on the yellow dress. You can also look at the pattern on my website. I am making it available for free. You can sell or use the knitted amigurumi deer doll as you wish. Deer might look a little different than usual. But I think it was such a cute crochet amigurumi. Do you agree? Please do not forget to share my posts on your own social media profiles if you agree with me.

sc : Single Crochet
inc : Increase
dec : Decrease
tr : Triple Crochet/ Treble Crochet
st: Stitch
dc : Double Crochet
hdc: Half Double Crochet
sl-st : Slip Stitch
ch : Chain
..in : make increase into same stitch as many as the number which is given in front of “inc” abbreviation (exp; 3inc, 4inc..).
FLO : Crochet into front loops only
BLO : Crochet into back loops only
BL : Bobble Stitch – do 5dc all in the same stitch and then yarn over and pull through all the loops on your hook (the original loop + 1 loop for each partially completed dc).
Reverse Single Crochet: Crochet the stitch from left to right. This technique is most often used to make edges look smooth and neat. Make a chain to turn back from font side. Crochet a single crochet one before from last stitch. Then continue in the same way through the right side of crochet while slightly flexing yarn. Crochet single crochet until end of the row.
(..) : Parenthesis which are written end of the round show the total number of stitches.

First leg is finished. Start second leg and crochet in the same way.
When Rnd 26 is completed, continue with single crochet up to middle of round for keeping legs hallows as looking each other. Do not fasten off yarn. When reach the middle of round make 6 ch and joint with other leg fill with polyester fiberfill after join legs.

We have finished crocheting the legs of the deer amigurumi. Now it’s time to crochet the deer’s body.

After crocheting the deer’s body, amigurumi will begin to form gradually.

You have crocheted one of the largest pieces of deer amigurumi.

Two different color yarns will be used to crochet nose. While changing colors, try to keep unused yarn under the crochet line. After crocheting nose is completed, tied two yarns and fasten off, leaving long tails from each color yarns for sewing. Use the same color with head to sewing nose on head.

After crocheting nose is completed, embroidery nose by using black thread. Milky brown side should look up side.
Then start sewing steps. Mark the middle of two eyes with pin. Use the same color with head to sewing nose on head.
Fill polyester fiberfill inside the nose while sewing.
Do not forget follow up instruction images! 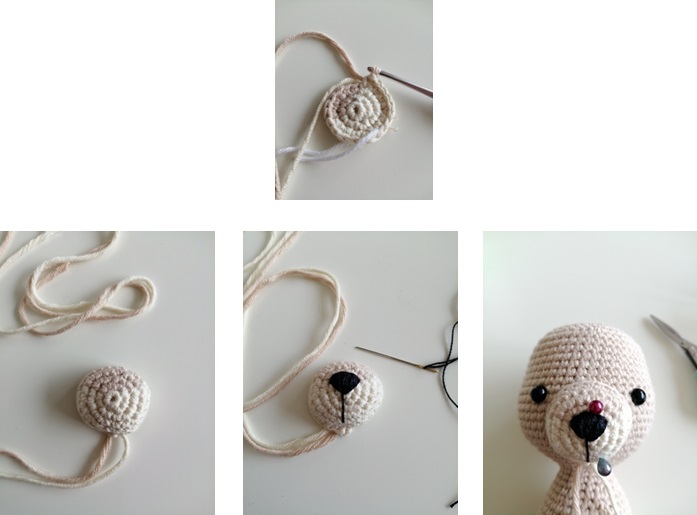 Horns (Use cream color and make 2)

Start with small horns.
As total there are 2 finished horns for right and
left side.

First horn is finished. Big horn is crochet as similar
way with small horn.
After 6th round is finished, without fasten off yarn

Do not forget follow up instruction images!
Sew ears and horns at both sides of head as symmetrically. Before sewing, check their location by using pins.
Do not fill polyester fiberfill inside horns.

Start crocheting at arm of dress.
By using chains, arm pits, back and collar will be created. Then the body part of dress will be started.
Do not forget follow up instruction images!

After completing all crocheting parts of Nenana, by using cream color yarn horizontal embroidery can be performed on head. Start from above of nose and continue towards up. Sew leaf in front of horn and ear and then add flower. You can do embroidery on dress with pink and green colors. So dress will match with flower and leaf 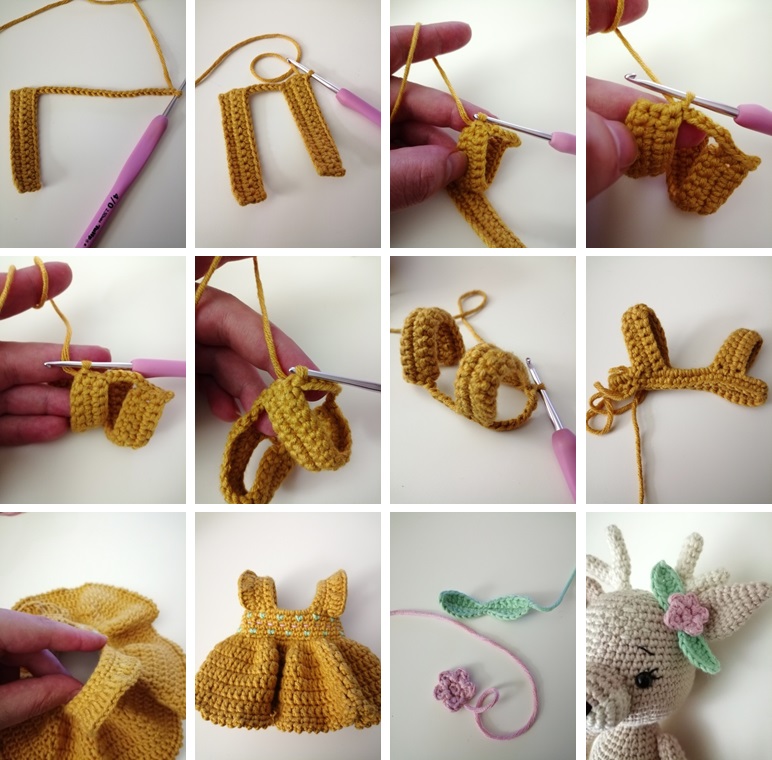 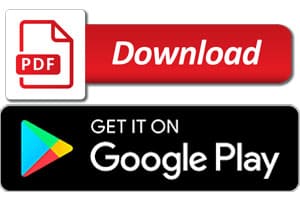 Share on FacebookShare on PinterestShare on RedditShare on VKontakte
LovelyCraftDecember 3, 2020
show 5 comments 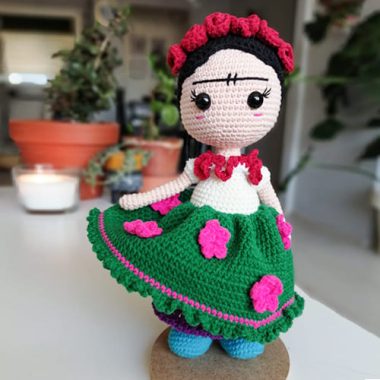 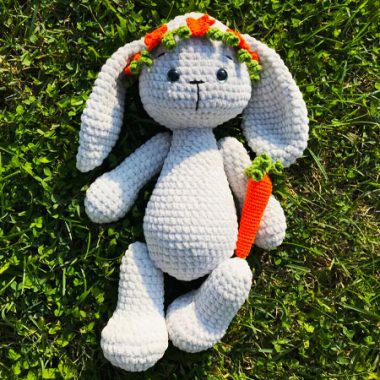 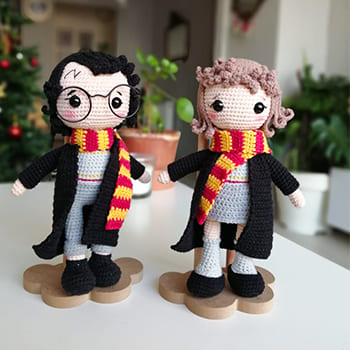 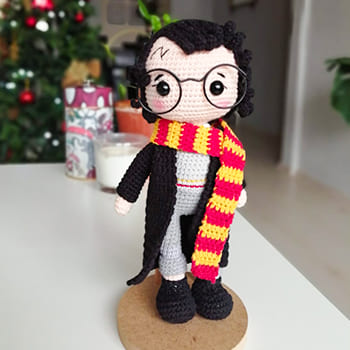